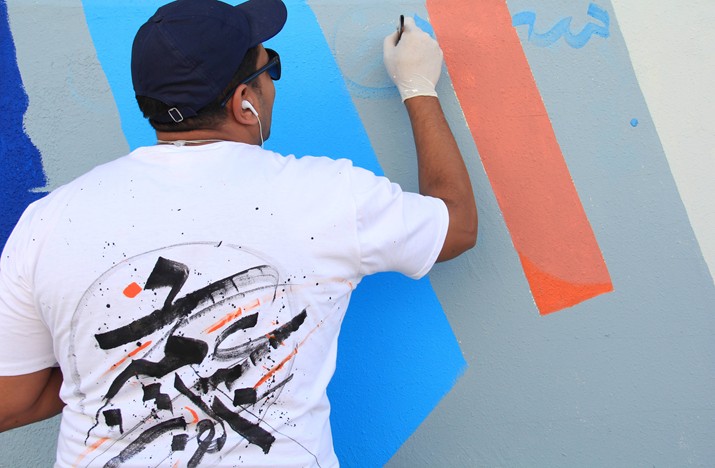 As part of the Sharjah Islamic Arts Festival, the joint Islamic graffiti art mural by Magdi ElKafrawy and Mohamed Abdel Aziz opened at the shore near the Maraya Art Centre

Under the patronage of His Highness Sheikh Dr Sultan Bin Mohammed Al Qasimi, member of the Supreme Council and ruler of Sharjah, the Cultural Affairs Department at the Sharjah Department of Culture has organised the 20th Edition of the Sharjah Islamic Arts Festival.

The joint graffiti art exhibition by Magdi ElKafrawy and Mohamed Abdel Aziz opened near the Maraya Art Centre. The exhibition was inaugurated by His Excellency Abdullah Al Owais, Chairman of Sharjah Department of Culture and Information; alongside Mohammed Ibrahim Al Qaseer, Director of Cultural Affairs Department and the Festival General Coordinator; Farah Qassim Mohammed, Islamic Arts Festival Executive; in addition to the participating artists and a large number of audience.

Magdi ElKafrawy explains the graffiti project, "The Islamic heritage continues to be one of the most important sources of visual inspiration for many artists in all aspects of creativity. Hence, under this unprecedented celebration, each of us is ought to express appreciation for the inspiration we receive from this art and its manifestations and impacts. Under the continuous search process taking place as part of our endless journeys into the depth of this artistic effect, which is full of secrets at all visual, technical and semantic levels. The main idea is to introduce Islamic art in a way that is compatible with modern art. The mural is based on the use of Islamic vocabulary in its known form or through visual gestures that suggest its existence by using different raw materials, such as arabesque, khyamia (patchwork), and others, in a huge work that combines graffiti and mural."

Mohamed Abdel Aziz, contemporary calligrapher from Egypt, contributed the calligraphy and Magdi ElKafrawy the ornamentation. The mural is in vibrant colours and brings the dull gray walls on the shore near Maraya Art Centre to life. The mural is a great contribution of Islamic graffiti art to Sharjah public.