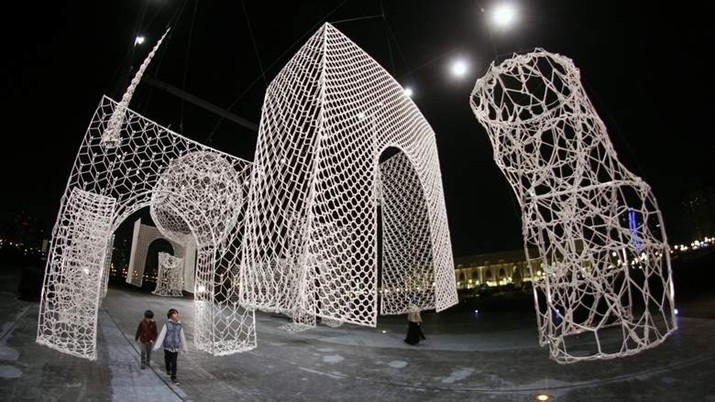 A flying mosque, floral pavilion and a host of artworks, being displayed at various spots in Sharjah city as part of the ongoing 20th Sharjah Islamic Art Festival (SIAF), have attracted massive crowds.

The SIAF, which will conclude on January 23, 2018, is being organised by the Sharjah Culture and Information Department under the patronage of His Highness Dr Sheikh Sultan bin Mohammed Al Qasimi, Member of the Supreme Council and Ruler of Sharjah.

Sharjah residents gathered at Al Majaz amphitheatre, where Flying Mosque - an art project by architects Choi and Shine from the US and the UK - is on display.

The architects said the Flying Mosque aims to create a sense of wonder among onlookers, with intricately-laced designs and producing a soothing effect. The softly growing and mysteriously floating forms, contrasting against the urban landscape and night sky is mesmerising. The artwork titled Floral Pavilion, being exhibited at Al Majaz waterfront, has been created by Aden Chan and Stanley Siu from Hong Kong.

The artwork - a kind of a dome with pierced Arabesque patterns inspired by the influential Islamic designs - attracted a large number of visitors and families who were seen photographing and admiring its unique design.

Magdy explained that the content of the graffiti project reflects Islamic heritage. "The main idea behind my project is to introduce art in a way that is compatible with modern art. My mural is based on the use of Islamic vocabulary in its known forms or through visual gestures that suggest its existence by using different raw materials such as Arabesque, Khyamia (patchwork) and others in the work combing graffiti and mural."

An artwork - Ornament of Prophet Muhammad (PBUH) - a kind of calligraphic design by Ahmed Al Qamri from Iraq was the centre of attention at the Calligraphy Art area. Speaking to Khaleej Times, Mohamed Ibrahim Al Qaseer, general coordinator of SIAF and director of Cultural Affairs at the Sharjah Department of Culture and Information, said that the 20th edition of the festival features incredible artworks, attracting a huge number of people. "The amazing turnout of visitors to the festival is unprecedented. It shows the interest visitors, especially residents, have in various types of art. Artists from around the world presented unique and exclusive works at SIAF. These artworks narrate the history and heritage of Islam," he added.

Khalid Muslit, head of the SIAF organising committee, said that the display of artworks in various areas has contributed to a great extent in attracting more visitors. There are 44 exhibits, 31 of which are works of artists from the UAE, neighbouring Arab countries, and other countries across the world.