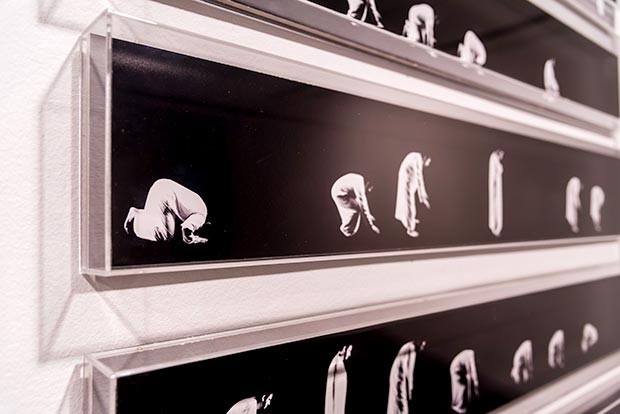 A pattern which immerses viewers in the movements and meaning of prayer in Islam through stark self portraits.

Under the patronage of His Highness Sheikh Dr Sultan Bin Mohammed Al Qasimi, member of the Supreme Council and ruler of Sharjah, the Cultural Affairs Department at the Sharjah Department of Culture has organised the 20th Edition of the Sharjah Islamic Arts Festival.

We present the solo exhibition 'Salah' by Ammar Al Attar, a photographer and mixed media artist. Born in 1981, he lives in Ajman in the United Arab Emirates. Completely self-taught, Al Attar’s practice seeks to not only document and translate but also methodically research and examine aspects of Emirati ritual, material culture, and geographic orientation that are increasingly illusive in his rapidly globalizing society.

'Salah' marks a shift for Al Attar from portraits of places to portraits of people, as a pattern which immerses viewers in the movements and meaning of prayer in Islam through stark self portraits.

Al Attar’s work has been increasingly shown within the UAE and Gulf, and is held in prestigious public and private collections including Sharjah Art Foundation, Barjeel Art Foundation, and Maraya Art Centre, the forthcoming Zayed National Museum, and others. He is represented by Cuadro Gallery in Dubai.

The exhibition 'Salah' is on view until January 23, 2018 at the Sharjah Art Museum as part of Sharjah Islamic Arts Festival 2017/18 that opened on December 13, 2017 and will run until January 23, 2018. Many exhibitions and large scale installations are on view at the Sharjah Art Museum, and on other venues such as Al Majaz Waterfront, Al Majaz Amphitheatre, Awqaf Department, Al Qasba, Maraya Art Centre, and Calligraphy Square.