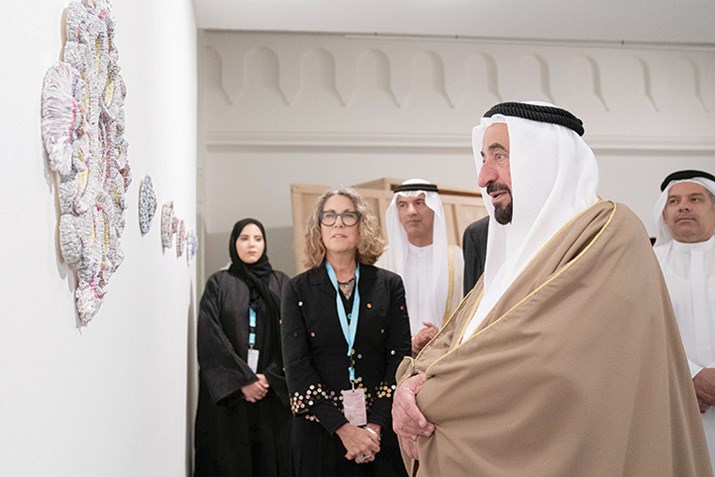 His Highness Dr Sheikh Sultan Bin Muhammad Al Qasimi, Supreme Council Member and Ruler of Sharjah, inaugurated on Wednesday the 22nd edition of Sharjah Islamic Arts Festival, under the theme, ‘Prospect’ organised by the Cultural Affairs Department at the Sharjah Department of Culture, at the Sharjah Art Museum.

The Ruler of Sharjah toured the 31 exhibitions held in the Sharjah Art Museum, which included a variety of artistic works that included sculptures, calligraphies, and others that reflect the splendour of Islamic arts.

During the tour, Dr Sheikh Sultan listened to a detailed overview of the exhibited artworks by the organisers of the exhibition and the artists participating in the festival.

The festival touches on historical, aesthetic, and human themes, revealing the historical symbol of ancient Islamic art by attracting the finest international artists, and providing a link between the old and the modern, under the theme ‘Prospect’, as it prompts contemplation and venturing on a journey towards visual realms that exist beyond the limits of space. It is about admiring beauty while being blindfolded. It is the practice of imagination that can invoke the absent beautiful and undiscovered realms.

The opening of the Festival was also attended by Sheikha Nawar Al Qasimi Director of the Sharjah Art Foundation, Abdullah Al Owais, Chairman of the Department of Culture, and a number of senior officials, ambassadors, and representatives of artistic institutions and local and international media.

On Tuesday, in the presence of senior officials, diplomats and authors, the emirate of Sharjah received the official title of Guest of Honour for the 34th edition of the Guadalajara International Book Fair, FIL 2020, to be held from 28th November to 6th December, 2020, making it the first city in the Arab region to receive this prestigious honour.

Ahmed bin Rakkad Al Ameri, Chairman of Sharjah Book Authority, received the title from Manpreet Vohra, Indian Ambassador to the Republic of Mexico, on the sidelines of FIL 2019, and announced the emirate’s official participation logo for FIL 2020, which says, “Everyone is Welcome”, in Arabic.

India was the Guest of Honour at the 2019 edition and passed on the baton to Sharjah during a handover ceremony held in the presence of Raúl Padilla López, President of FIL; Marisol Schulz Manaut, General Director of FIL; Ricardo Villanueva Lomelí, Rector-General of University of Guadalajara; authors; publishers, and media representatives.